Alright, just one word for you this week: Bombino! 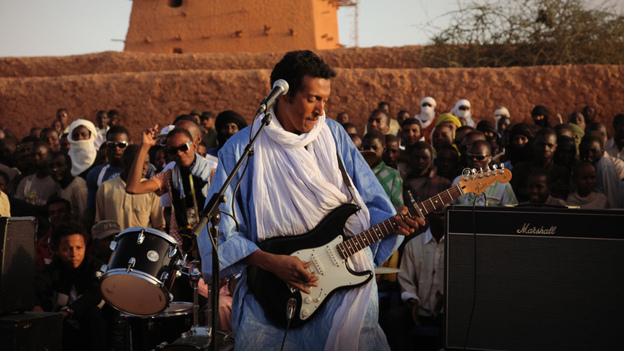 Alright, I lied… just a few more words. Special thanks to nephew Dan and our good friend Rick Saunders for turning me on to Omara “Bombino” Moctar (sorry I missed a few of your posts, Rick… won’t let that happen again!). Deep Saharan blues with lots of swagger. Bombino brings to mind the great Malian guitarist Ali Farka Toure, but he’s jackin’ a Strat through a Marshall amp. In other words, he’s young and fearless and making me forget all about that Knopfler guy (another influence; Hendrix and Hooker are in there too). You’ll be hearing a lot more about Bombino down the road. In the meantime, check Deep Blues or Afropop Worldwide for bits and pieces of his remarkable backstory. Here’s a slice from Afropop:

“Agadez is a town in the north of Niger. When the off-and-on Tuareg rebellion in that region of North Africa surged again in 2007, the town became a conflict zone. The young guitarist/singer/songwriter Bombino had his first band up and running at the time, but when two members were killed, he fled to Burkina Faso. These experiences – rebellious guitar music, sudden outbursts of violence, flight, nomadism and separation from home and loved ones – are all part and parcel of the Tuareg rock experience.”

You also can go here to order “Agadez, the Music and the Rebellion,” a documentary about the Tuareg culture of the Sahara Desert (I believe the first and third videos are from the film). You’re welcome.