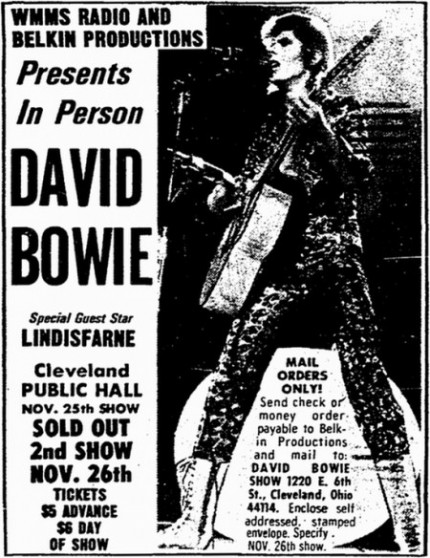 As I’ve said before, I’m really not a “let us now praise our fallen rock heroes” kind of guy. But we’re reaching critical mass this month, so I felt compelled to weigh in on three of them: David Bowie, Glenn Frey and Akron native Kevin Junior.

A few days after I heard the news about Bowie, it occurred to me that I might have a unique perspective to share, given that I saw his first concert in the U.S. (at Cleveland Public Hall in 1972) as well as one of his last (at Cleveland’s Wolstein Center in 2004 – about five months before the final tour was canceled following his heart surgery in Germany). Of course, the trick here is trying to recall any salient details about the first show, because I was young, impressionable and very impaired.

I got all swept up that year in the well-deserved hype around The Rise and Fall of Ziggy Stardust and the Spiders from Mars, so naturally I had to take my girlfriend to the show. But I remained partial to “dude-rock” bands like Foghat and Savoy Brown… Let’s just say you wouldn’t go to St. Vincent’s High School in Akron to explore the alternative lifestyles that Bowie championed throughout his career.

But Bowie’s band, the Spiders from Mars, was his Trojan Horse – the glorious contraption he used to share his bold new vision of the world. And no self-respecting dude-rocker could resist those heavy, sledgehammer riffs that guitarist Mick Ronson used to great effect on tunes like Suffragette City and Ziggy Stardust.

Bowie liked to joke that his seemingly androgynous guitarist was “a salt-of-the-earth type” with “a defiantly masculine personality” – much like a certain Texas blues flamethrower he hired to play guitar on Let’s Dance. So the glam label (and, as it turned out, Bowie’s sexuality) always seemed like a bit of a red herring to me. Eventually, bands like The Clash and The Cure would take a more authentic and often political stance when it came to their music and lifestyles. But those bands would never even exist without Bowie and his gateway drug, Ronson.

Today, as even the most adventurous listeners struggle to make sense of the many warring factions in contemporary music, it’s easy to forget that Bowie was The Great Assimilator – always coming up with startling ways to weave in strains of hard rock, doo-wop (Golden Years), Philly soul (Young Americans), funk (Fame), electronica (the Berlin years), blues (Let’s Dance) and even jazz (his final album, Blackstar). I doubt if my own daughters will ever see a major artist bring people together like Bowie did (well, maybe Adele… but I guess that depends on how you define art).

There’s one thing I’ll never forget about the Bowie show in ’72. I knew I was witnessing something revolutionary, which made me feel exhilarated and more than a little frightened. Then someone hit the switch on the strobe lights, and that’s when things really got strange. Bowie began performing, uh, an act of oral supplication on Ronson – in an artsy, simulated, strobe-lit sort of way. Holy shit… The older kids at St. V’s never told me about this! Stoned out of my gourd, I watched helplessly as little shards of my parochial-school brain drifted off into space, with no chance of reassembling into the mind I once knew. 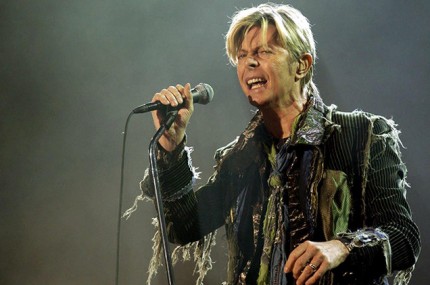 Bowie during the 2004 Reality tour

The Wolstein show was a whole different affair. By 2004, Bowie was a cultural icon and a card-carrying member of the Rock and Roll Hall of Fame. Someone offered me tickets for the show, and I actually contemplated turning him down… I hadn’t listened to a new Bowie recording for years and didn’t have the patience for big rock concerts (I’m now more of a small club kind of guy). But fortunately I decided to grab the tickets at the last minute and brave the crowd.

Gone was all the spectacle and artifice of that first U.S. tour. Bowie simply took the stage and owned it, like a true rock ‘n roll hero. He was 57 at the time but seemed at least 20 years younger. From the opening riff of Rebel Rebel (is there a better riff in rock?) to the seven songs he played as an encore (including the Velvet Underground’s White Light/White Heat), Bowie made it clear that he ranked among the greatest living performers in any genre. He also scored bonus points for having the good taste to bring along Canton native Macy Gray as his opening act. 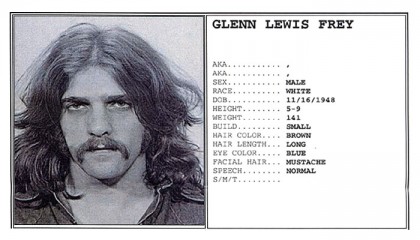 Compared to Bowie’s bisexual Ziggy, Glenn Frey was the schoolyard bully. Yeah, he sang and gently strummed his acoustic guitar like a sensitive troubadour, serenading a bevy of beautiful, dark-tanned California girls (at least that’s how I imagined it). But in real life, Frey and his longtime accomplice Don Henley were hard-partying, high-testosterone bad boys – real assholes, you might say, as evidenced by the unflinching documentary History of the Eagles, one of the greatest rock movies of all time. You have to appreciate any film that portrays Joe Walsh as the calm, cool-headed voice of reason.

But the Eagles doc gave me greater respect for Frey as an artist and songwriter. First, it’s clear he had a deep understanding of the craft of songwriting. One of the film’s best clips shows Frey waxing poetic about Jackson Browne’s work ethic and how it rubbed off on him when he and J.D. Souther shared an apartment above Browne’s space:

“Around 9 in the morning I’d hear Jackson’s teapot go off with this whistle in the distance, and then I’d hear him playing piano… (He’d) play the first verse and play it 20 times until he had it just the way he wanted it. And then there’d be silence and then I’d hear the teapot go off again, then be quiet for 10 to 20 minutes… Then I’d hear him start to play again, and then there was a second verse, and then he’d work on the second verse and play it 20 times… So that’s how you do it – elbow grease… Time, thought, persistence.” And, in Frey’s case, some honesty and eloquence to go along with all that arrogance.

Second, Frey either wrote or co-wrote some of the sturdiest songs of the Seventies. Take It Easy (co-written with Browne), Desperado, One of These Nights, Take It to the Limit, Heartache Tonight, Hotel California… It’s easy to diss these guys, but you can’t deny the lasting power of their songs. Bowie might’ve ruled in ’72, but Frey and the Eagles provided the soundtrack for the rest of the decade. 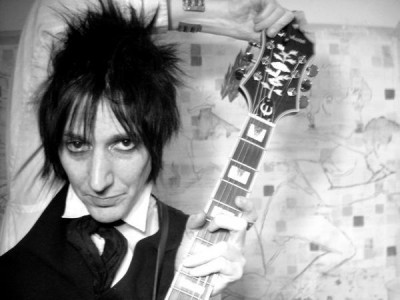 I’m embarrassed to say I didn’t know anything about Kevin Junior until I saw something online about his untimely death. But I was touched when I read about him (an article in the Chicago Reader was simply title Heroin Hell, referring to the years he spent struggling with drug addiction and depression) and listened to his wonderfully crafted soul-pop, especially a few of the critically acclaimed songs he recorded as leader of the Chicago-based group The Chamber Strings.

He spent the last few years of his life back in Akron (where fellow Firestone High student Chrissie Hynde used to babysit a young Junior), hanging out with local musicians and playing the occasional gig at the Highland Square club Annabell’s. Locals looking for a deeper dive into Junior and his Akron roots should check out this piece by Beacon Journal music writer Malcolm X. Abram.

Junior brings us full circle in that he was one of literally thousands of artists – spanning music, design, fashion, film, glass-blowing, you name it – who were inspired by Bowie. In fact, the final posts on Junior’s Facebook page serve as an online shrine to his idol. He quoted a friend’s reaction to Bowie’s death: “And all the weird kids feel like they just got punched in the chest,” and then noted “I am still that weird kid & my chest is hurting.” That last line might’ve been prophetic, because he suffered from the life-threatening heart disease endocarditis. But as a fellow music scribe put it, he probably just succumbed to rock ‘n roll.

I also came across a post by Chicago-based musician and RCR friend Tod Michael Bowers, bass player for The Steepwater Band. He rightfully pointed out that, much like Bowie and Frey, Junior wasn’t just an amazing songwriter, he also a fan of great songs (remember Bowie singing Little Drummer Boy with Bing Crosby?). Here’s a clip of Junior – who looked like a more pale and frail version (if that’s possible) of Ron Wood – performing an acoustic version of a song by Wood’s bandmate in The Faces, the late Ronnie Lane. RIP Kevin, David and Glenn:

Stephen Colbert thanks Glenn Frey for bailing him out at a school dance: 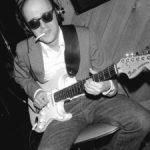 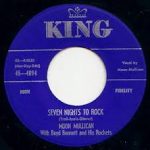