Article first published as Music: The Case of the Mysterious Banjo Player on Blogcritics. 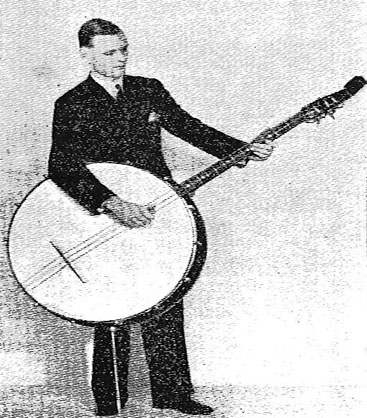 In that crazy business called show, there are few pursuits offering less glamour than the life of a bluegrass musician. Most practitioners of this highly disciplined form of music believe its greatest rewards involve communing with other skilled and reverent bluegrass musicians to master the intricate melodies of ancient fiddle tunes. In contrast, most rockers just want to snort coke off a call girl’s ass.

That’s not to say that a few bluegrass gigs don’t get a little out of control. And my flat-pickin’ brothers James and Jack have great stories to tell about the many nights they’ve spent playing in roadhouses filled with rednecks. Some of those tales focus on the usual exploits of the over-served. Others involve random acts of violence that seem like they were lifted from songs of death and sorrow by the Stanley Brothers.

James, who played in a popular north Florida bluegrass band back in the early ‘70s called the Flying Aces, recalls one gig at a bar on St. George Island that took a particularly chilling turn:

“I was sitting at the bar during a break when I heard a commotion behind me and turned around just in time to see a woman tumbling backward into the band equipment, mic stands falling like dominos across the stage. She had just been swatted by her husband who walked away as if nothing had happened. When we ran up to help her to her feet she said, ‘Just get me to my truck’… which we did.  A few minutes later I noticed some guys sitting by the window gesturing wildly toward the parking lot outside. They were yelling ‘no, no, no’… then a shot. The woman had retrieved her pistol from the glove compartment and shot her husband – ‘in the kidney,’ they later reported. About the time the ambulance arrived the bar owner came to me and said, ‘Don’t you think it’s time for you guys to start playin’ again?'” 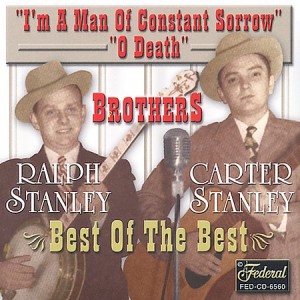 I sat in with the Aces on several occasions. On one trip south, I joined James and the boys for a week in Melbourne, FL, where we worked on an archaeological dig for a shrimp boat captain (don’t ask… I’m pretty sure drug money was involved). We stayed in the captain’s house, which was nice but sparsely furnished, although it had plenty of canned goods in the pantry. One night we decided to start an impromptu picking session at a nearby bar, which went fine until one of the locals grabbed James’ guitar and started singing a tune that sounded like it wouldn’t have been out of place at a Ku Klux Klan rally (or a David Allan Coe show). It opened with the less-than-inclusive verse “Martin Luther King was a Ni…” We snatched back the guitar before he could finish, hurled a few f-bombs on the way out the door and high-tailed it back to the captain’s nest.

Sadly, I don’t show up at all in my favorite story about a bluegrass gig. It unfolds at the Pastime Tavern, a dive on Tennessee Street in Tallahassee – just a short stumble from the campus of Florida State University. That’s where James and Jack took the stage in the early ’70s as The Quine Brothers Band. On one of those evenings, they were greeted by a quiet but friendly gentleman with a beautiful banjo. I’ll let James pick it up from there:

“We were both on stage when a sharp-dressed, well-groomed guy – especially for the times – walked in carrying a banjo case and asked if he could sit in. We didn’t normally encourage sit-ins, but this guy was clearly something different, so we said OK. That’s when he pulled out his banjo – gold hardware and mother of pearl all over the place. As I remember, he just stood in the back of the stage mostly playing rhythm. When his turn for a solo came around, I would glance back at him to see if he wanted it. I think he pretty much played on everything… definitely knew a lot of fiddle tunes.

“After he left, somebody said he was a former writer for the Smothers Brothers who was doing comedy shows on campus the next couple of nights. I don’t think anybody in Tallahassee had actually seen his act. Jack saw the first show and made me go with him to the second. I hurt myself laughing. He was definitely at the top of his game… Wasn’t the least bit funny when he played with us, though.” 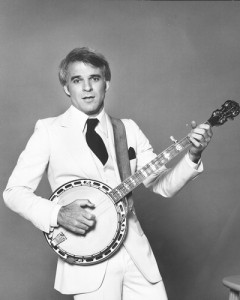 The mysterious banjo player turned out to be Steve Martin, who had reached a critical point in his career by the time he hit Tallahassee in ’73. He had already appeared on the major TV shows – Johnny Carson, Merv Griffin, Mike Douglas – and had written for Sonny and Cher and the Smothers Brothers. But he was still performing at small clubs that seated less than 100 people.

In some ways, Martin’s great flair for the surreal worked better with the smaller crowds. And he would often think of ways to take the show out of the clubs and into the streets, where he would improvise with virtually anything. In his book “Born Standing Up,” Martin describes a Florida performance in ’73 that must have occurred only days before he showed up at the Pastime:

“The Florida night was balmy and I was able to take the audience outside into the street and roam around in front of the club, making wisecracks. I didn’t quite know how to end the show. First I started hitchhiking: a few cars passed me by. Then a taxi came by. I hailed it and got in. I went around the block, returned and waved at the audience – still standing there – then drove off and never came back.” 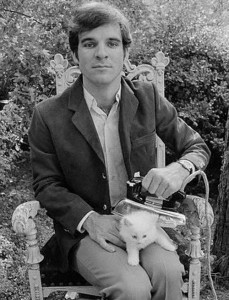 James remembers a similar scene when Martin performed at Florida State. “The entire audience of about 200 people followed him out of the Down Under (a restaurant/beer hall in the Student Union) into the parking lot, which was at the bottom of an embankment leading up to Tennessee Street. Martin came up with the idea that he would climb the embankment and hitchhike. When a car stopped, everybody would run up and try to get in. He moved on to something else, of course. At one point he stood on a rock, pointed to the sky and said, ‘See that moon? That moon is over 10 miles away.’”

James made a point of seeing Martin when he returned to Tallahassee a couple of years later, and even wrangled a backstage visit. “He seemed to remember me, which I assumed was insincere until he asked how my brother was doing, which I found pretty remarkable.”

By that time, Martin’s act was turning into a hit. He started wearing a white suit so he could be easily seen at greater distances. “I was conflicted because the white suit had already been used by entertainers, including John Lennon,” he wrote. “I was afraid it might seem derivative, but I stayed with it for practical reasons, and it didn’t seem to matter to the audience or critics.” He also would tease the folks in the cheap seats with his magic dime trick, claiming to change the date of the dime. “Then I would ask the back row what they’d paid to get in. They would shout it out, and I would laugh hysterically, implying that they were getting screwed.”

Martin had finally made it to the big time. But his newfound fame had one obvious downside: He could no longer make an anonymous visit to the Pastime Tavern to play a few of his favorite bluegrass tunes with the Quine Brothers Band.

So the obvious question is, can this guy really play? I’ll let this next tune speak for itself: Wally On The Run/Steve Martin