After I pushed the button on my Dan Hicks/Mike Flowers post, I realized I’d made a big mistake… Should’ve featured those videos in a more appropriate format. Why not put together a virtual variety show for the interweb generation? What a great idea, right? And even if it doesn’t make sense, who’s going to argue with a guy wearing an ankle bracelet? 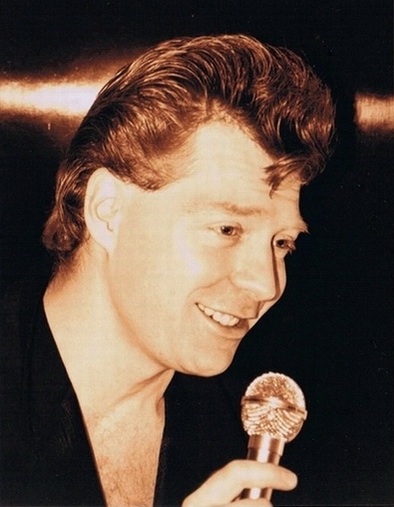 Hi, welcome to the Rubber City Variety Show… I’m your host, Bobby Whitewall. We’ve got a real humdinger of a show this week, and it’s brought to you by our good friends at Johnson Motors – it’s all about you, your friends and your Johnson.

So how ‘bout this weather in northeast Ohio? Don’t like it? Wait five minutes – it’ll change… (click)

Wow… this audience is a lot better than the one from last week. I tell ya, that crowd was so tough, they started leaving five minutes before they showed up… (click)

Yeah, I mean tough… And who’s idea was it to book that pastry chef? Poor guy had to use a crème brulee torch to defend himself… Now that’s a tough crowd! (click)

Hey, how ‘bout those Indians? They’re really on a tear. Just last week, Slider finally showed up at the ballpark without a bag over his head… (click) See, he’s a mascot – no need for the bag! (click)

You guys are great! I wish I could take all of you home with me – and throw my wife out the back door! (click)

Dad gum it, how ‘bout those boys? I’m old enough to remember the original by George “Thumper” Jones. Hell, I even remember when George had most of his liver! Man, he used to fight like mad with Tammy Wynette… She got tired with all that honky tonkin’ – told George she didn’t like him drinkin’ and drivin’ too. George said “I don’t drive when I’m drunk. I just sit in my car and wait for my house to pull up”… (click) What’s that, Vic? Yeah, good idea. Go ahead and edit that one out.

We’re gonna take a short break for a word from our sponsor, Johnson Motors. But stick around – because we’ll be right back with a very special guest from a far-away land…

You know, when the sun’s going down and I’m heading back to the harbor, I can always count on my Johnson to get me home. (click)

I caught this next fella’s act last week at Sonny’s House of Meats over by the racetrack. Now I’m a “moon in June” kinda guy, so it took me a little while to warm up to his crazy songbird schtick. But my wife was on him like a cheap suit, so I figured you ladies out there might dig him too. Turns out he’s here on a visa from one of those “stan” countries – Kazakstan, Turkmenistan, Nolyricstan, whatever. (click) And Sonny, there’s a man with a heart… Not only did he get this guy a job packing meat, he also designed the set for this very special performance. So the least I can do is throw in a little plug for Sonny’s House of Meats. Remember, you can beat Sonny’s prices, but you can’t… Christ, Vic. Quit waving your arms around. I’m moving as fast as I can. Let’s give it up for the great Trololo…

Nice job, Trolly… Come back when you learn a few songs. Y’know what chicks also dig? Harmonica players. Not sure what that’s all about, but it reminds me of a joke I stole from my Uncle Gus, who blew more than a few Hohners over the years. What’s the difference between a pizza and a harmonica player? Pizza feeds a family of four. (click) Anywho, we found this guy down by the Greyhound Station – home of the Dirty Dog, as we like to call it. And we’ve got a very special guest today who just happened to be visiting relatives in Cleveland on her way to Reno. Peggy, let’s see if you can resist an unemployed harp player…

Hey, that harp player was pretty good. Stepped all over Peggy, though… don’t think she’ll invite him on the bus.

Man, the air’s getting kinda stale in here. Let’s wheel a couple of those cameras out the back door and take a little walk outside. Besides, we’ve got some groovy cats set up near the shipping dock, ready to slap you upside the head with some serious blues. You heard of B.B. King, Albert King, Earl King?? Well, none of those guys were available to play today. (click) So I called my booking agent and asked him to find another black guy named King who plays blues guitar. Here’s Freddie:

Hey, Freddie… watch those lapels. You’ll poke somebody’s eye out. (click) Time for another pause for the cause. Don’t go away – we’ve got a little taste of Vegas for you Rubber City Chickens.

A few years ago, I had a job booking fresh talent over at the Tangier. You know, the kinda class acts you used to see on the Ed Sullivan Show. So when they let me go, I was smart enough to grab my old Rolodex. Luckily, I still had the number of Ed’s former assistant, Cosmo, who convinced us that plate-spinning is the way to go. Kids love it, and it gives mom and dad enough time to mix another highball. Then again, Cosmo also sent us that sicko with the fist puppet. Kids couldn’t sleep for a week. Can’t say I’ve seen this guy’s act before, but he comes highly recommended. Alphonse, bring this guy out while I freshen up my drink…

Well, guess he was over-served in the green room. Remind me to pull Cosmo’s number out of the Rolodex. Anywho, that’s about all I can take for one night. It’s been a real pressure… and you won’t want to miss our next show. Booked a guy you won’t believe – juggles baby goats. Got his name from Ed’s former accountant. See you next week! (click)

The Untouchable Soul of Robert WardGeneral
Live from Germany: The Sam & Dave ShowGeneral