After spending the last few weeks mining the deep vaults of my music collection (down in the basement, where I only go to do research and clean up catshit), it dawned on me I should take another stab at sharing a few recent finds. 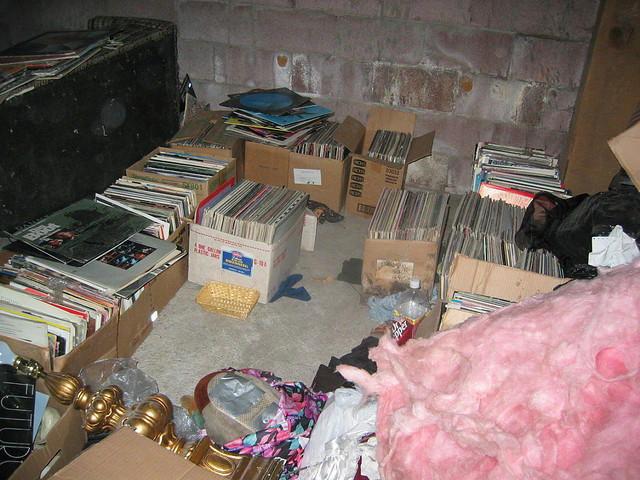 Of course I can’t do this without help. So I decided to call on someone far younger, prettier and more in touch with today’s file-sharing youth – April Fecca, proprietor of the very excellent music blog Now This Sound is Brave. April graciously agreed to match me song-for-song this week. Otherwise, this would be RCR’s shortest post yet (probably not a bad thing).

Most of my new finds come from people who, for some odd reason, started following me on Twitter. If it weren’t for that little benefit and maybe Andy Borowitz, I probably wouldn’t be on Twitter at all. As Borowitz recently pointed out, “Twitter: where good manners and spelling come to die.”

April, on the other hand, comes across her new finds the old-fashioned way – slogging from club to club to interrogate the glassy-eyed denizens of Northeast Ohio’s rugged music scene. Hey, it ain’t Brooklyn or Portland. Just that worthless patch of Flyoverland that gave us Devo, Pere Ubu, Chrissie Hynde, The James Gang, The Outsiders, The Black Keys, Robert Quine, Ralph Carney, The O’Jays, The Dead Boys, Lux Interior, The Raspberries, Traci Chapman, Alan Freed, Bobby Womack, Macy Gray, Nine Inch Nails, Dave Grohl, David Allan Coe, Screamin’ Jay Hawkins… I’m sure someone will scold me for leaving a few acts off this list.

I’ll kick things off by sharing a clip of a damn good Americana band – Joe Fletcher & the Wrong Reasons. If world-weariness were an art form, Fletcher would be its standard-bearer. The band hails from Providence, RI, which seems to have a vibrant music scene to go along with its struggling economy. And judging from this video, Fletcher might be the best thing to come out of Rhode Island since Roomful of Blues (I’m showing my age again… should’ve referenced Deer Tick instead).

A.F.: Though Mudlow has been around since 2002, they have only just released their second album, the gorgeous Sawyer’s Hope, and it might make you wish every band took eight years between albums. The Brighton UK-based band has honed their noir blues to a tight, rich perfection. Sawyer’s Hope is brimming with cinema-worthy stories, foggy atmosphere, and gritty grooves.

T.Q.: Although I know very little about Nick Waterhouse other than what you’ll see next, his website makes it clear he’s an old-school vinyl kind of guy. And his debut, Time’s All Gone, does a fine job of replicating the warm sound of vintage instruments and tube amps recorded with the latest analog technology in “some hacked-together shack.” But he gets 5 stars from RCR for coming up with a truly memorable video… Enjoy the ride:

A.F.: The easiest way to sell Chicago’s Daniel Knox is to describe his music as dark cabaret to scare the children, but he’s more than that. While some of Knox’s most appealing songs are laced with sardonic wit, you’ll often find painful honesty lurking just below the surface as his resonant voice moves from bass-baritone to tenor and sometimes even peaking hauntingly into soprano. Local tie-in: Knox occasionally works with Akron son Ralph Carney to wonderful effect.

T.Q.: April and I will sign off with a couple of old warhorses showing new signs of life. Even with the legendary Rick Rubin at the helm, I didn’t have high hopes for ZZ Top’s La Futura – especially when The Black Keys backed out early on. Still, I felt compelled to check it out (on MOG, of course – wasn’t going to buy the goddam thing). I wouldn’t call it a back-to-basics triumph; more of a welcome reminder of the band’s career sweet spot, Tres Hombres. But I must admit, they ride out of the corral with guns blazing… gotsta have more of this: I Gotsta Get Paid

A.F.: Originally hailing from Cincinnati, the Afghan Whigs – who were the first non-Seattle band signed to Sub Pop Records – broke up in 2001, and singer Greg Dulli held fast to the declaration that the band would never reform. It is very good to see Dulli proven wrong as the band is currently touring, leaving a trail of blown minds and ecstasy in their wake. Their soul-influenced rock packs an even bigger punch now than it did in their “heyday,” and one can’t help but hope that Dulli, Curley and McCollum will grace us with another album of superior rock.