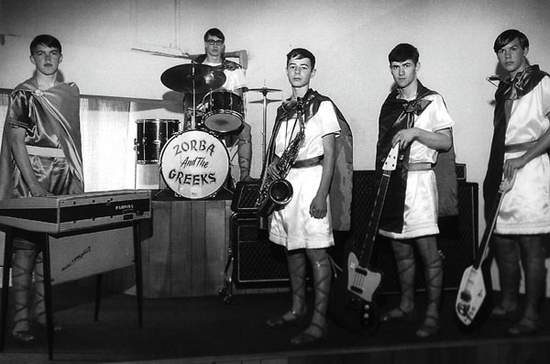 I have this theory about the Beach Boys… that people who live in northern, land-locked areas, where it’s brutally cold nearly half of the year, have little patience for their well-crafted odes to the surfer lifestyle.  And this theory has, for the most part, proven true – although it doesn’t begin to explain why people in the Midwest have no problem dressing up like Carmen Miranda to go to Jimmy Buffett concerts. 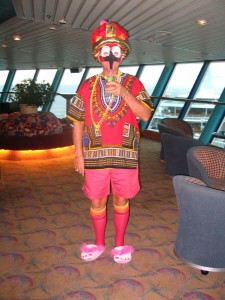 One thing is certain:  There are few greater pleasures in rock ‘n roll than a finely executed surf instrumental.  And if you expand the definition to include “surf-influenced” songs, then you bring into the tent some of the best guitarists of any genre – from Link Wray and Lonnie Mack to Freddie King and Albert Collins.

Sure, there are the classic surf instrumentals that even my mother could reel off – Walk Don’t Run by the Ventures, Telstar by the Tornados, Wipe Out by the Surfaris, Misirlou by Dick Dale and the Del-Tones, Pipeline by the Chantays… all flawless songs that belong in the “Surf Guitar Retrospective: A Half Century of Reverb” at the Smithsonian.

But that’s just the tip of the board (let me shut off this metaphor machine before it spits out “hidden treasures in the sand”).  In fact, modern surf-guitar gems are being cut by the likes of Southern Culture on the Skids, Los Straitjackets and James Wilsey.  And it’s our job here at Rubber City Review to give you the digital warning signs you need before wading into these murky musical waters (where is that goddam switch?). 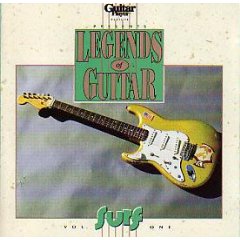 Of course, there are countless treasures from the heyday of surf guitar, the early Sixties.  Unfortunately, the best collection of Sixties surf instrumentals I ever came across – “Guitar Player Presents Legends of Guitar: Surf, Vol. 1” – has long been out of print, and I’m fairly certain that Rhino Records never got around to issuing Vol. 2.  The beauty of this collection is that it assumes you already have the touchstones like Wipe Out and Telstar and are looking to dig a little deeper.  It’s a great mix of the familiar and obscure, and everything on it is first-rate.  Here’s the track listing (and four samples) in case you want to try to find these tunes online: 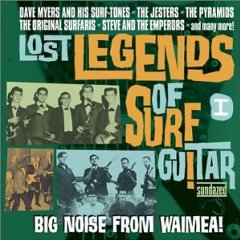 The more adventurous can check out a five-disc series of surf instrumentals on the Sundazed label – “Lost Legends of Surf Guitar.”  The handy All Music Guide calls it “good, though not nearly as good as the very best ‘60s instrumental surf music anthologies, and can be confidently recommended to surf collectors.”  The “Lost Legends” series makes a distinction between surf and “hot rod” or “drag” tunes, a fine point I’m not sure I can grasp (when I hear tires peeling at the beginning of a song, I know it’s “hot rod”!).  Regardless, the New York-based label is an excellent source of American roots music – from garage/punk and psychedelic to country/rockabilly (including a 3-CD set of Jimmy Bryant – check out our earlier “Speed Demons of the West” post) and blues.  Sundazed also reissues original albums by surf-guitar standouts like The Challengers, The Surfaris, Ronny & the Daytonas and many more.  You can find them here. 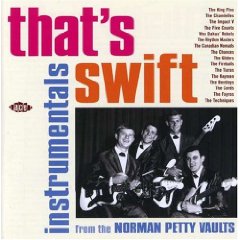 Nephew Dan turned me on to this next one – a top-shelf collection of instrumentals recorded by Norman Petty (Buddy Holly’s first manager and producer) in the early-’60s at his studio in Clovis, New Mexico.   “I think of Norman Petty as a southern, white version of Berry Gordy and Motown Studios,” Auerbach said.  “Just like the setup at Motown, Petty was cutting edge and experimental with the recording equipment and techniques.  And he used his own stable of musicians – mostly members of the Fireballs (and their great guitarist George Tomsco) – for a lot of his stuff.”  Although his voice is one of the more recognizable in rock, Auerbach certainly appreciates the appeal of the guitar-based instrumental.  “First of all, it’s not easy to find a good singer – especially if you run a studio in Clovis.  But Petty could create a real band almost instantly with a guitarist who could pick out a few melodies.”

The great irony of the surf influence on “That’s Swift” is that most of Petty’s bands were from New Mexico and West Texas (Wes Dakus and the Rebels came all the way from Canada).  Auerbach sees a connection between Petty’s operation and the Rubber City:  “I bet Clovis is a lot like Akron… I’m sure Petty’s musicians heard a lot of influences, but didn’t see them up close.  They definitely heard the records and saw the pictures, but had to figure out how to do it on their own.”  Here’s one of Dan’s favorites from “That’s Swift”: Sour Biscuits/Wes Dakus and the Rebels

Surf music didn’t get buried by the Beatles – who, as it turns out, were big fans of Brian Wilson.  But maybe it’s not the right label to describe the best examples of contemporary, surf-influenced songs.  Maybe “reverb-drenched instrumentals”?  Whatever you choose to call the genre, it’s pretty clear that a whole slew of latter-day rock, blues and country pickers owe a huge debt to the first generation of surf guitar slingers – including living legends like Nokie Edwards of The Ventures, who continues to play and record today. 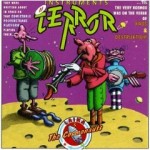 Given the fact that we Americans have a habit of neglecting our most prized musical treasures, it makes perfect sense that one of the leading proponents of modern surf guitar is from Finland: Laika and the Cosmonauts.  Unfortunately, it appears the band’s 22-year career has come to a close.  A shame, really, because these guys seemed to have a knack for reinventing the surf instrumental – throwing in healthy doses of sci-fi, vintage soundtracks and other exotica to create instant classics that defy categories.  Their guitarist, Mikko Lankinen, is no slouch, but he clearly prefers melodic invention over Dale-like shredding.  Here’s a tune from an album released back in 1992, “Instruments of Terror” – still one of my favorite all-instrumental records. Note Crisis/Laika and the Cosmonauts 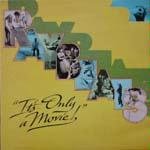 Even New York City’s post-punk, downtown music scene got in on the act, spawning “neo-surf” combo The Raybeats back in 1979.  The band’s long-gone album from 1983 – “It’s Only a Movie!” – is a curious mix of quirky, synthesized soundscapes and straight-ahead tributes to Booker T and Link Wray.  Guitar Player magazine called it “one of the top 10 instrumental albums of all time”… but it’s difficult to find, and very little has been written about the band or its members (except for former Raybeat and current Straitjacket Amis). It featured a rootsy yet innovative guitarist from Kansas, Jody Harris, who went on to record with The Golden Palominos and former Lou Reed guitarist Robert Quine (he described Harris as “tragically underrated”).  Here’s a tune from “Movie” that belongs in the surf hall of fame, wherever that is… Soul Beat-Intoxica/The Raybeats 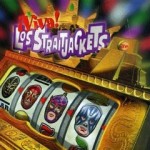 They’re the Godfathers of Mexican Surf.  They’ve got a strong fan base in Spain and Russia.  Their annual Christmas Pageant is one of the holiday season’s hottest tickets (if you conveniently ignore some bloated, heavy-metal steamroller).  And their cover of My Heart Will Go On, the love theme from the movie “Titanic,” reportedly had Celine Dion contemplating early retirement.  When it comes to surf-based instrumentals expertly played by grown men in Mexican wrestling outfits, there’s only one band worth talking about: Los Straitjackets.  The fact is, these guys are damn good.  Just ask The Ventures or Tom Petty and the Heartbreakers – or, if you could bring them back from the great beyond, Link Wray and Ronnie Dawson.  This next one sounds like the theme from a long-forgotten TV show… a damn good one at that! Pacifica/Los Straitjackets 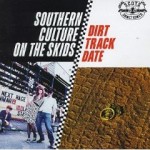 If there is such a thing as a hot-rod/hillbilly concept album, it was released in 1995 by Southern Culture on the Skids.  “Dirt Track Date” was a major-label release with a used condom on the cover.  And it sings the praises of the white trash lifestyle with heartfelt songs about Cadillacs (with eight slappin’ pistons under the hood), shiny pants, pointy tipped shoes, fireflies, Tony Joe White, Little Debbie snack crackers, eight-piece boxes of chicken and, of course, hookin’ up at the dirt track races.  But once you get beyond the broad jokes, you quickly realize these three can flat-out play.  Rick Miller’s guitar is almost as greasy as the chicken, and he’s clearly a sucker for an over-fried tube amp.  He also knows how to throw together a catchy instrumental, like this twangy homage to the galley slave… Galley Slave/SCOTS 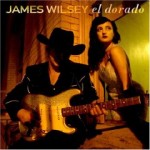 I guarantee you’ve heard James Wilsey.  Remember that signature, moody lick from Chris Isaak’s huge hit, Wicked Game?  That’s Wilsey.  The former punk-rocker played in Isaak’s band until 1991, when he left to pursue a less-hectic lifestyle – one better suited to the sparse, understated sound of his guitar.  But he’s back with a new band, and he calls his all-instrumental originals “space-age hillbilly stuff, little-haunted-house-on-the-prairie music.”  He sounds like a perfect fusion of Duane Eddy and Link Wray, if you dragged them through the hot Arizona desert at High Noon.  If you’re looking for evidence that the surf-guitar instrumental has evolved over the years, check out this original from Wilsey’s latest, “El Dorado” (released in 2008)… El Dorado/James Wilsey

Quick hits… Not quite surf, but wouldn’t you rather have these guys at your beach party than Frankie and Annette?  (For you young ‘uns, think Carson Daly and whatever bimbo he brings along.)

The Iceman Picketh – Sounds like the Master of the Telecaster, Albert Collins, had his ear cocked to a few surf records back in the early Sixties… Frosty/Albert Collins

If you’re more familiar with the Grateful Dead’s version (or even the original by Bobbie “Blue” Bland), you need to shake hands with the man from Aurora, Indiana: Lonnie Mack… Turn On Your Love Light/Lonnie Mack

Bonus video from the heyday of surf guitar… Dick Dale and the Del-Tones play their classic Misirlou in the 1963 movie “A Swingin’ Affair.”  I love the bass player (I’m guessing he handled the books for the band), and it’s pretty cool that they let dad play drums: