Let’s revisit one of our first posts, from October 2009 (Bo Diddley passed away the previous year at the age of 79).

He signed his name “The Bo” and was referred to by The New York Times as “Mr. Diddley.”

If bluesman Little Walter was the troubled genius of Chess Records, his labelmate, Bo Diddley, was just plain crazy. Bo clearly shared Walter’s restless spirit and drive, as well as a constant need to test the very limits of his equipment… and his audience. A true original, Bo recorded some of the most demented sides in rock ‘n roll history. A half-century later, those recordings still manage to startle us… Bo’s Guitar

Here Bo’s band locks into a groove that could have easily gone on for another 15-20 minutes at a typical Fifties juke joint. Pretty Thing

Like the vast majority of people on this planet, I never had a chance to see Little Walter perform. But I did play with The Bo – me and about 10,000 other bar-band veterans around the world. 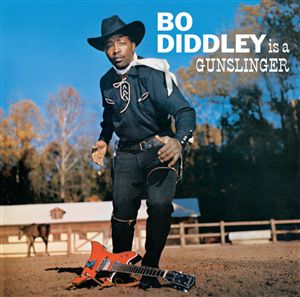 You see, it became standard practice for the original rock royalty like Chuck Berry and Bo to hire pick-up bands in various towns to back them up for their gigs. It went something like this: Bo’s manager would call a local promoter, who would recommend a local band, and said band would spend several hours (or days, depending on the band’s level of confidence) rehearsing Bo’s tunes – with no idea what Bo would unleash on them when he hit town.

Well, our band (The Warsaw Falcons) got the nod for several of his gigs in the Cincinnati area, and the first one was a custom car show at the Cincinnati Gardens in 1983. We figured that Bo would show up early and spend about an hour with us going over the set list and running through a few tunes. No such luck. We met Bo about 10 minutes before the gig, and the only direction he provided was telling our hapless drummer not to play the patented Bo Diddley beat (if you’re not familiar with it, please exit our site now)… “Only I play that beat, buddy!”

Things went better than expected, though, as Bo quickly whipped us into shape by barking out a few commands during the opener. And we hung on tight for the rest of the set, doing our best to follow his every move and not get in the way. It was an unsettling experience, looking out at an audience of classic cars on the floor of the Gardens (“I’d like to dedicate this one to that pretty little Chevy in the third row”)… but it was a huge thrill for me to play with the one and only Bo. He even brought me to the front of the stage and made me kneel down – the only time I’ve ever done that outside of church. I felt like I’d joined the sacred order of Bo sidemen… sort of the blues equivalent of the Masons.

It also was the only time anyone asked for my autograph (at least in a deep and meaningful way). Apparently, a few of Bo’s overeager fans thought we were part of his traveling extravaganza, rather than semi-employed schlubs who only lived a few miles away.

We did two more gigs with The Bo – including one opening for The Drifters at Miami University. The absolute best part of that experience was drinking beer in our dressing room and listening to The Drifters warm up in the room next door by singing their hits a cappella. Needless to say, we all wept openly. 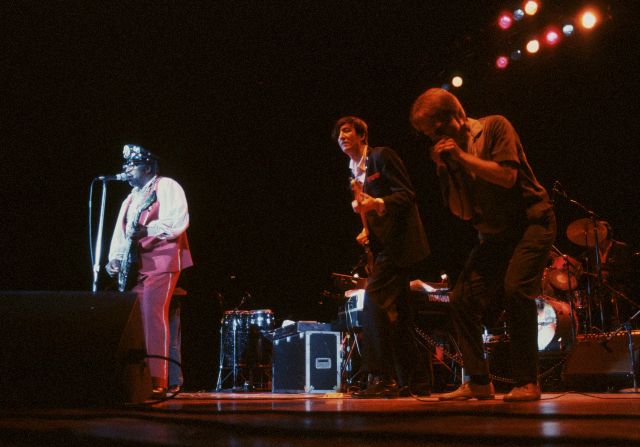 Bo never had much to say to us. He was bitter about the small amount of money he made from his hits while the next generation of rockers made millions. And he would rather have been back home in Florida than feeding white folks’ hunger for nostalgia. But he snapped out of character long enough to make me the butt of a very elaborate joke involving a baby peeing itself (when the punch line came, he squeezed a wet paper towel hidden in his fist, and the water ran over my outstretched palm… many laughs at my expense).

The Bo left this world on June 2, 2008, but his beat goes on in hundreds of bars on any given Saturday night. I’ll leave you with these few examples of his power and glory… Amen!

Bo on video… Let’s start with a classic – Bo’s first and only appearance on the Ed Sullivan Show, 1955 (he was asked to play Tennessee Ernie Ford’s 16 Tons and decided to play the self-reverential Bo Diddley instead… Bo was never invited back)…

Here’s a brief clip of Bo in ’65 on the ABC-TV show Shindig! playing his hit Road Runner, with the fine-looking Duchess (known to her parents as Norma-Jean Wofford) on second guitar…

The Warsaw Falcons’ intrepid sound man taped our gig with Bo right off the board. But given the 30 years that have gone by since our 50 minutes of fame, I wouldn’t call this hi-fidelity. Still, it’s worth sharing. Here Bo gives a shout-out to all his main men and women from the Fifties (including himself!): Bo Testifies

This might be my favorite Bo artifact… Since he never brought his own amp with him, he always was at the mercy of someone else’s crappy equipment. Apparently, he didn’t care much for the one we brought! Jack It Up 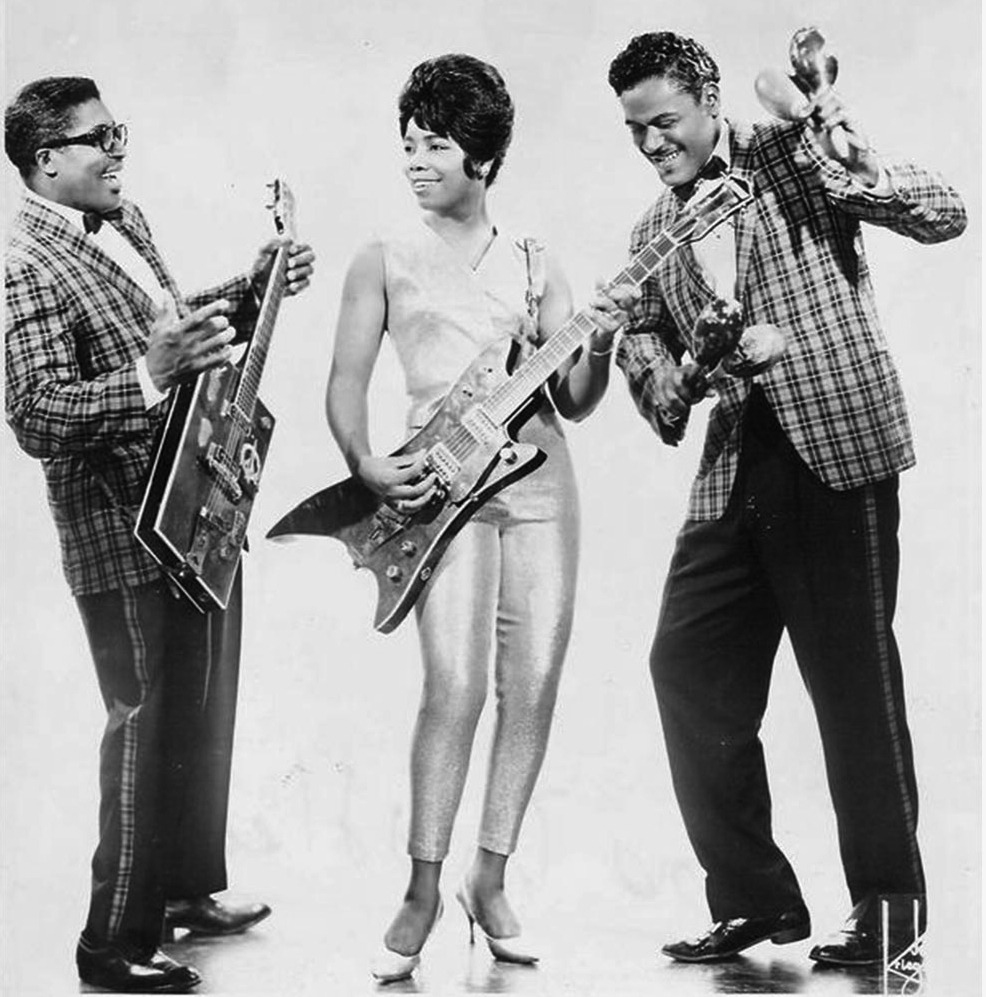