It was a bad year for blues, with the passing of the great B.B. King and the continued popularity of wankers like Joe Bonamassa.

Why do I keep coming back to the form? Because it’s filled with overlooked and under-appreciated artists (like the ones below) who remind us that the best blues is all about expressing basic human emotion in very direct, honest and personal terms. In other words, you’ve got your purveyors of truth, and your slingers of shit… Take your pick. 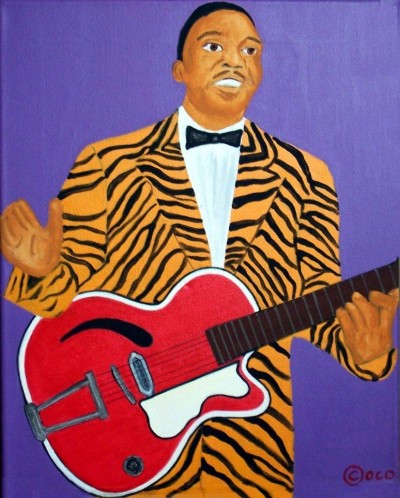 He wrote a bona-fide blues hit (Mama, Talk to Your Daughter) and is a member of the Blues Hall of Fame, but J.B. Lenoir flew well under the radar screen from his first performances in the early 1940s to his untimely death in 1967. That might’ve been due to the highly charged political content of songs such as Vietnam Blues, Alabama March and Eisenhower Blues. Director Martin Scorsese gave the artist some much-needed exposure through the documentary series The Blues and an accompanying Lenoir CD. But that didn’t make him a household name… even in households that worship Muddy and Wolf. Could have something to do with that high-pitched, almost feminine voice – kind of soothing, but a little unsettling too. Eisenhower Blues

We could argue whether barrelhouse piano player Roosevelt Sykes qualifies as obscure. He recorded prolifically for the Okeh, Decca and Bluebird labels during the Thirties and often is recognized as a major influence on virtually every blues-based piano-pounder who followed. But like other “elder statesmen” who were more informed by swing and hot jazz, he fell out of style in the Fifties when Muddy Waters, Little Walter and John Lee Hooker started plugging in and cranking up their more aggressive take on urban blues. Still, I can’t help but smile when this tune pops up on my Apple-branded random music generator: Stop Her Poppa 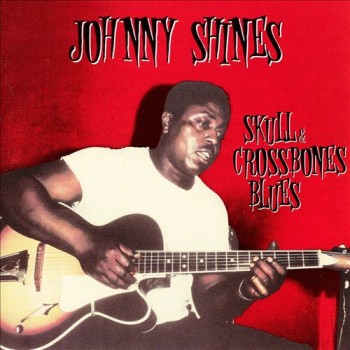 First Columbia sat on his recordings, then Chess wouldn’t release his stuff either. After a session for the J.O.B. label met the same fate, a dejected Johnny Shines went back to his previous job working construction. But then someone from Vanguard found him in a Chicago blues club in 1966, which led to a slot on the label’s popular LP series Chicago/The Blues/Today! Thanks to those recordings and the various blues revivals that followed, Shines had more gigs than he could handle for the rest of his life. But you could spend a few months listening to Bluesville on XM before you hear one of his songs. Here’s one of my favorites, recorded for the Testament label in 1966: Two Trains Runnin’

Even the Sixties blues revival couldn’t save Robert Nighthawk from a lifetime of relative obscurity. And the only one to blame for that is the artist himself. According to a Nighthawk-centric website, his associates described him as “restless, taciturn and stubborn”… he led a nomadic existence and was curiously absent from Chicago during most of the glory years of the 1950s (preferring to spend his time in St. Louis, Clarksdale, his hometown of Helena and many points in between)… he had a habit of skipping out after gigs without paying his bandmates… and, as fellow bluesman Henry Townsend remarked, “You sure couldn’t dance off his blues – boy, they were as draggiest as they get!” But draggy is a very good thing when it comes to the wonderfully eloquent and electrified slide of Robert Nighthawk, who was captured live on Chicago’s Maxwell Street in 1964 by filmmaker Mike Shea in his documentary And This Is Free (see clip below, with lots of dancers). Here’s a track he recorded in 1949 for the Aristocrat label (which became Chess the following year) as “Nighthawks,” with Ernest Lane on piano and Willie Dixon on bass: Anna Lee

We heaped a fair amount of praise on Earl Hooker in our post on the Great American Blues Instrumental. But that didn’t do much to raise his profile, so we’ll try again by asking the obvious question: Why didn’t this stunning guitarist get the recognition he deserved? For one thing, his playing was more proficient and far-ranging than many of his peers (he probably could’ve made a living playing lap-steel in Nashville). And musical diversity isn’t always rewarded or appreciated in the blues community, which can be very parochial. Unfortunately, that also makes it difficult to find great comps like Blue Guitar: The Chief/Age/U.S.A. Sessions (1960-1963)… Here’s a taste: Blue Guitar 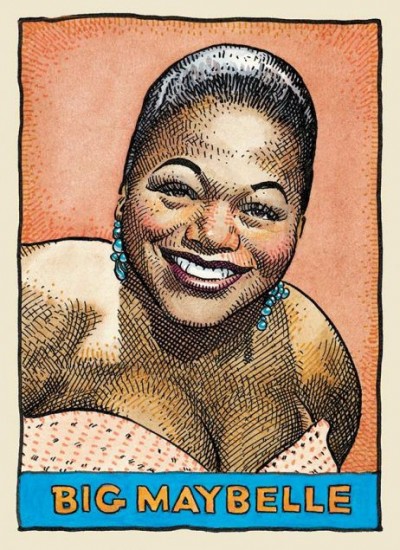 I don’t have much else to say about Big Maybelle beyond what I already shared here. I think she qualifies as “unsung,” since she’s not as well-known as Big Mama Thornton (whose own career was eclipsed by Elvis when he found a way to tame her snarling original version of Hound Dog). But I’m a little partial to Maybelle – especially her Okeh recordings from 1952 to 1955. Her voice has so much power and heft (that’s right… big woman, big sound) on these cuts. You can almost picture the session players – even hard-boiled veterans like guitarist and former child gangster Mickey Baker – soiling themselves in fear. Think of all the advances made in recording technology over the past 60 years… None of them can improve on this: One Monkey Don’t Stop No Show

You could argue that virtually every artist in the swamp-blues category is underrated – and that’s especially true with Lightnin’ Slim. In fact, you’d be hard-pressed to find a better “best of” than the out-of-print Slim comp Rollin’ Stone. Combine the primitivist recording techniques of one J.D. “Jay” Miller (is that a snare or a cardboard box?) with Slim’s menacing voice and whacked-out material like this tune… If you don’t dig it, I’ve got nothing else for you here. It’s Mighty Crazy 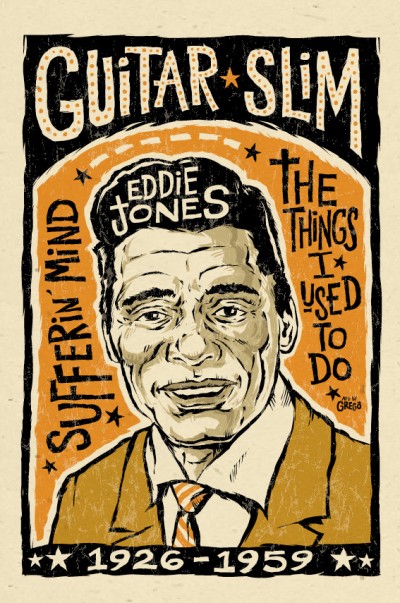 Without Guitar Slim (known to his parents as Eddie Jones), there wouldn’t be a Ray Charles, Jimi Hendrix or a whole slew of New Orleans R&B. A young “pre-Brother” Ray produced Guitar Slim’s regional hit The Things That I Used To Do, which helped shape the Crescent City sound during the mid-Fifties. And the wild guitarist’s fondness for distortion and shtick (he’d play fiery leads while being carried out of a juke joint on an assistant’s shoulders with a couple hundred feet of cord trailing behind them) certainly had a big impact on Hendrix. Let’s not forget he was a powerhouse singer who seemed to draw inspiration from both the church and the depths of hell. Did all that bring him fame and fortune? Of course not… Alcohol killed him at 32. But at least he made our list. Certainly All

It’s easy to think of guitarist Jimmy Rogers as one of the many talented sidemen who worked their way through Muddy Waters’ classic bands of the Fifties and Sixties. But he also left behind a very solid (and much-overlooked) body of work under his own name. I always liked his casually soulful singing and steady-rolling grooves, heard to great effect on his signature song, Walking By Myself. He also benefited from having some of Chicago’s best (usually Muddy’s band, without Muddy) play on his recordings – blues giants such as Little Walter, Otis Spann, Big Walter Horton, Willie Dixon, Fred Below… I would’ve paid to hear these guys play nursery rhymes. Rogers toured and recorded into the Nineties, often backed by more contemporary artists including Rod Piazza, Kim Wilson and Ronnie Earl. Here’s a prime cut from 1990 featuring Wilson on harp and Pinetop Perkins on piano: You’re Sweet 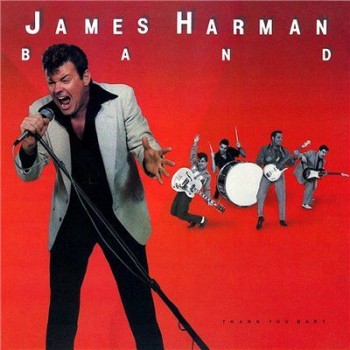 I think the real reason I came up with this bogus theme was to share a little love for James Harman. Although he’s often associated with hard-swinging, West Coast blues, he’s actually a native of Anniston, Alabama, and made his first recordings in Atlanta at the age of 18. His voice is a thing of beauty, steeped in the gospel of his boyhood church choir. He’s also one of the tastiest harp players on the planet – no flash, no wasted notes… just the stuff that matters. And he infuses most of his songs with a healthy dose of wit, as you can tell from titles like Blue Stretchmark Tattoo and Last Clean Shirt. I’m especially fond of two Harman releases: Extra Napkins and Two Sides to Every Story. The former features another unsung hero, blues/swing guitarist (and Muddy sideman) Hollywood Fats, who died of a heroin overdose at the ridiculously young age of 32. The latter album is a little less greasy but includes this funky gem, a personal favorite (for more on Harman, including a sample of his 2015 release Bonetime, check here): My Little Girl 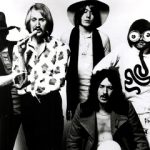 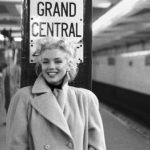 My Baby Thinks She’s a TrainGeneral