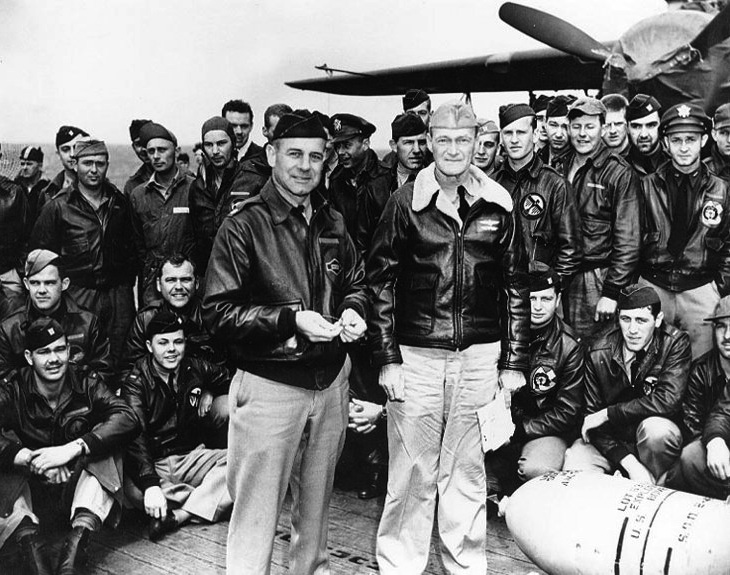 I should’ve posted this on Veterans Day, but I didn’t come up with the idea until I heard a piece on NPR about the Doolittle Raid during World War II. Led by James H. “Jimmy” Doolittle, the raid was launched four months following the Japanese attack on Pearl Harbor, with 80 U.S. airmen targeting Tokyo and other locations in Japan.

Based on the cold, hard facts, you wouldn’t call the mission a success. The bombers missed many of their targets, and all of the 16 aircraft were lost. Three men died during the raid, three were executed by the Japanese, and one died of starvation in captivity. But the raid helped bolster the morale of Americans by exposing some obvious weaknesses in the Japanese military.

The NPR piece featured three of the only four surviving raiders, gathered together for what will probably be the last time at the National Museum of the U.S. Air Force in Dayton, Ohio (they range in age from 92 to 98). And as I listened to the piece, two main thoughts entered my mind: 1) these gentlemen are very old, and 2) these guys are the biggest badasses on the planet.

Later that day, I remembered a song that seemed to describe the incredible odds these men faced. Written by Harold Adamson and Jimmy McHugh, the song is based on a line from the 1942 film The Flying Tigers, starring John Wayne. When Wayne’s character asked a hotel clerk if he had any word on the fate of an American plane, the clerk responded, “Yes sir, it was attacked and fired on by Japanese aircraft. She’s coming in on one wing and a prayer.” Adamson and McHugh ran with it, and their musical tribute gave the Song Spinners a #1 hit the following year. But I prefer a ragged-but-right version by Ry Cooder (from his 1972 release Boomer’s Story): Comin’ In on a Wing and a Prayer

If you came here looking for a sampling of anti-war protest songs, I’m sorry to disappoint. Believe me, I have my favorites. But let’s set those aside for now and focus on some rootsy tunes that take a more personal look at wartime in America… as well as two men who, in my humble opinion, exemplified the act of serving one’s country. 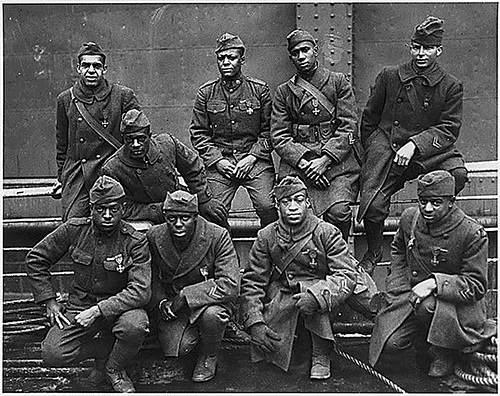 Thousands of African Americans lined up to enlist during World War I, anticipating more favorable treatment when they returned home. Of course they didn’t fare well by either measure – surviving the war or gaining respect. So maybe the angst expressed by Blind Lemon Jefferson in the next song was prophetic (not to mention pathetic): “What you going to do when they send your man to war; I’m going to drink muddy water, go sleep in a hollow log.” Although he didn’t record it until 1927, Blind Lemon probably played the song on the streets of Dallas during the war: Wartime Blues

War his hell, but good for business. Just ask anyone who was looking for work during WWII. No matter what city John Lee Hooker ended up in, he found a decent-paying job at a factory. By 1948, he was working full-time at Ford Motor Company in Detroit and playing clubs along Hastings Street at night. But he must have run across a few folks who struggled to make ends meet following the war. In this song, Hooker’s protagonist runs out of money, loses all his friends and ends up on Highway 51, probably heading back to the Delta (oddly enough, from California, even though the highway runs straight south from Wisconsin). Maybe he was hoping for his fortunes to improve during the next war. War is Over (Goodbye California)

If there was a lighter side to the soldier’s life, Hardrock Gunter probably mined it in this strange little song. I wouldn’t compare it to the razor-sharp humor of M*A*S*H… Just consider it a historical artifact from the Korean War era. Obviously, Gunter was a bit of a goofball, but he’s credited with paving the way for rock ‘n roll and rockabilly with songs like Birmingham Bounce. He also fought in the Battle of the Bulge and retired from the Army as a Major, so cut him a little slack… Rifle, Belt & Bayonet

Here’s the flip side to Hardrock’s humor – a brooding lament by the great stream-of-consciousness blues artist Robert Pete Williams. “Oh Lord please send my poor son back home to me…” Songs about war don’t get much more personal and sorrowful than that. Sad News From Korea

The protest song reached its peak during the Vietnam War – from the sublime (What’s Going On) to the sublimely ridiculous (I Feel Like I’m Fixin’ To Die Rag). I’ve got a weak spot for those and many more, but you can’t deny the power of a more straightforward song from the fully integrated studios of Memphis’ Stax Records. “She said she’d wait three years or more… That made my life worth living for.” Written by Steve Cropper and Eddie Floyd, the song was recorded by William Bell in 1966 – a year that saw a significant increase in the number of U.S. troops, and casualties, in Vietnam. Marching Off to War 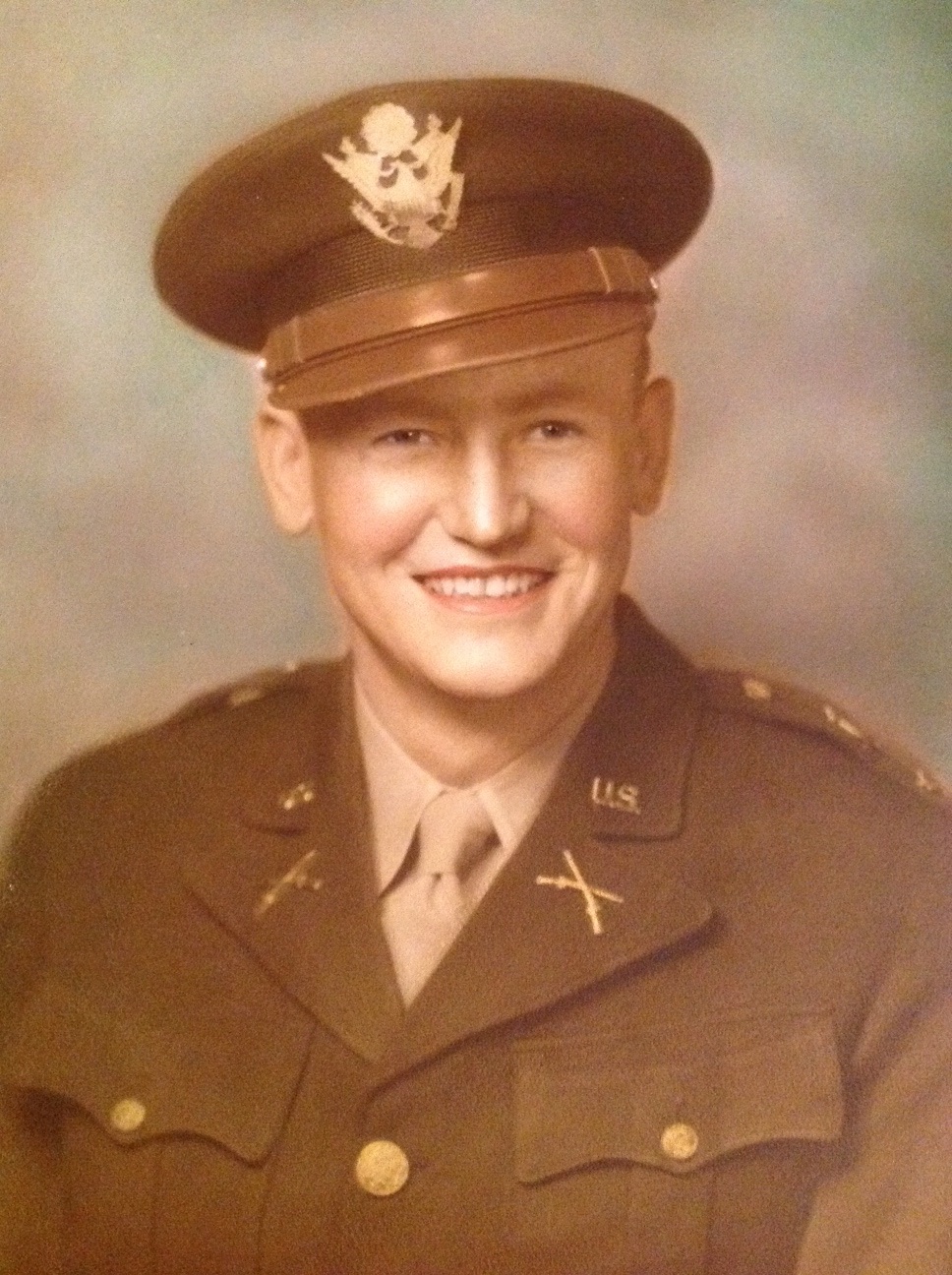 I don’t have any war-related songs in mind to honor my Uncle Longino Little… He really didn’t want anything to remind him of the horrors he experienced in Europe during World War II.

Longino’s oldest brother, Buddy, fought in World War I and met an unimaginable end – dying from severe burns caused by mustard gas, the ultimate weapon for trench warfare. I’m sure that loss weighed heavily on Longino’s mind when he enlisted in the Army and took part in the preparations leading up to the Normandy landings that began on June 6, 1944.

As a Captain, Longino was charged with coordinating the movement of troops and weapons in his company, which landed at Normandy two days after the first invasion. On July 10, they met heavy fire on a road near Sainteny, France. An official account of the week-long battle noted that Captain Little carried out his duties “in a courageous and skillful manner, working tirelessly under almost constant exposure to enemy fire.”

Over the next two months, the company kept the Germans on the run until they reached the Siegfried Line (along the France-Germany border) – an area that was well-defended by German mortars and machine guns. “We lost so many of our people,” Longino said years later. “We lost 11 officers in two days.”

Longino was on patrol in a field looking for another company of soldiers when a machine gunner caught him in his sights. He took the brunt of the fire on his right side and fell to the ground, hoping the gunman would consider him dead. After an hour or so, he could feel the blood pooling in his boots. “I jumped up and decided to run back to cover. I fell over into this shell hole on top of an enlisted man who had just been hit by that same German machine gunner.” Several hours passed before Longino finally decided, “Well, if (the gunner) wants to kill me, he’s just going to have to kill me. And I jumped up and ran just as fast as I could on back (out of the field).”

The German soldier “threw everything he had” in Longino’s direction. “My belief is that he had his gun sights set wrong, because all the shots that came my direction were going just about four feet to the right… If that gun sight had been set right, he would have made me ’bout like a screen door,” he said in his deep southern drawl.

Longino ran into a large group of soldiers sent to rescue him. “If they had gone out there (in the field) it would have been a catastrophe.” He finally received first aid around midnight – 10 hours after he was shot. Then Longino was operated on at a field hospital, “sewn up” in Paris and rehabilitated in southern England before returning home in 1945. 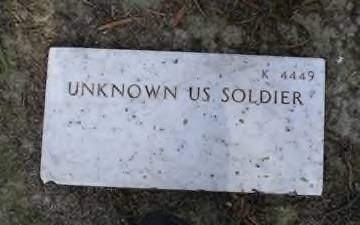 Longino was among the fortunate ones. He received a Bronze Star and Purple Heart for his heroism and then trained recruits for the Air Force while living a rich and rewarding life with his family in Milledgeville, Georgia (the Little family farm was only a couple of miles, as the crow flies, from Flannery O’Connor’s Andalusia estate).

For the most part, Buddy and Longino were recognized for their service and sacrifice. What about those who serve their country, pay the ultimate price, and then fade from memory? It rarely happens today, but the remains of thousands of soldiers who perished in previous wars have never been identified. We’ll close with a song written by Roy Acuff that captures a desperate search for a soldier’s grave: Searching for a Soldier’s Grave/The Bailes Brothers

Here’s a raw, emotional song about the wars in Iraq and Afghanistan – by Jason Isbell (formerly with Drive-By Truckers). 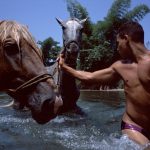 C.C. Rider (and other songs of love)General