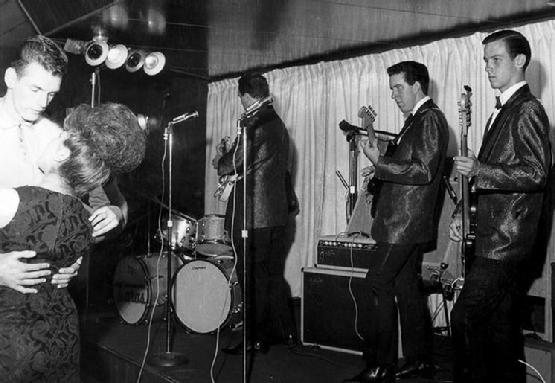 Summer is right around the corner. Time to whip out the Fender Jaguar with whammy bar, Dual Showman amp, tube reverb unit, Precision bass and Rogers drum kit with a sweet floor tom. You surf freaks out there know what I’m talking about.

For the purposes of this week’s playlist – and recognizing the fact that I’m reporting from a completely landlocked community – we’ll expand our definition of surf to include a few related strains, like garage rock and blues instrumentals. To me, it’s all about the guitar. And who am I to tell Lonnie Mack he can’t hang with the Ventures? 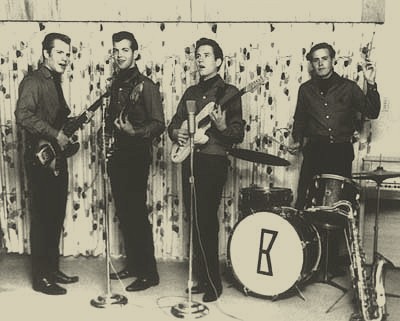 Let’s start with something as unarguable as mom, apple pie and an awesome Malibu longboard. Although he grew up in El Paso and idolized fellow Texan Buddy Holly, Bobby Fuller cut most of his classic stuff in the more surf-friendly environs of Southern California. I’m sure you’re familiar with his most enduring tune, I Fought the Law (famously pilfered by John Mellencamp for his hit Authority Song). But you might not know that Fuller and his band, The Fanatics, also rode the surf with the best of them. Here’s a ’64 release on the Donna label that plays off of one of the year’s most popular TV shows, My Favorite Martian. Unfortunately, Fuller died two years later under mysterious circumstances… and the rumors continue to swirl. Some think The Mob was involved; others blame Charles Manson. Let’s not rule out aliens. Our Favorite Martian

Speaking of Holly… How did Clovis, New Mexico, become such a hotbed of surf guitar? Well, it starts with a first-rate producer – in this case, Norman Petty, who had a proven track record with the world’s greatest bespectacled rocker. Then throw in all those tasty stringbenders who made the pilgrimage to Petty’s Clovis studio back in the ‘50s and ‘60s hoping to get a piece of that action. Of course many of them showed up without a singer nearly as good as Holly. The solution? Cobble together a few surf-rock instrumentals that might inspire even more pimply faced kids to pick up a Fender. Here’s one of those bands responsible for this odd looping effect: The Tiaras (basically four gringos from Amarillo, shown in photo at top of post)… Mexican Rock 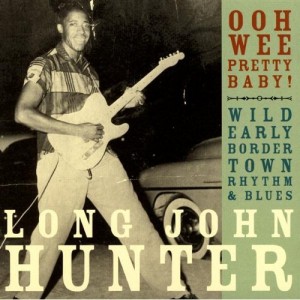 Now let’s head back down to El Paso, where a young blues guitarist named Long John Hunter landed in 1957 after a disappointing run at Houston’s Duke label. Hunter soon found a home across the Rio Grande in Juarez, where he held a steady gig at the Lobby Café for about 13 years. Two of his band members were Mexicans – local bartenders who Hunter personally whipped into shape to play his unique brand of border-flavored blues-rock. During this period, Hunter’s biracial band cut a number of sides for the small Yucca label in Alamogordo, New Mexico, where Bobby Fuller also recorded a few tunes. I wouldn’t call any of these songs surf, but they fall neatly into my “Beyond” category (meaning the guitar is front and center and they rock like Roman Polanski’s casting couch). Let’s give it up for Miriam Linna, proprietor of Norton Records, for digging these up in ’99 and adding her always-colorful comments in the liner notes. The Scratch

What do we know about The Fretts? Bupkus. I found this tune on a curious collection of rarities: Rockin’ Guitar and Early Original Piano Boogie Woogie (looks like the label could’ve use a copywriter). And the less-than-helpful liner notes plow right past The Fretts: “As a special treat, we offer you four unreleased guitar instros [sic] by two bands about which nothing is known [the other band is The Impacts].” Given the allure of this exotic little workout, I think they deserve a far better fate, don’t you? Ranch ‘n

Here’s another entry in the “Beyond” category… We covered Lonnie Mack pretty well in a previous post – one of the most influential rock guitarists to emerge in the early Sixties. Lonnie’s an absolute speed demon, but one who plays with consummate soul and taste. Here he turns the heat up on a tune later made famous by Creedence Clearwater Revival. CCR’s is my third-favorite version – Lonnie’s shares the #1 title with the awe-inspiring original by Dale Hawkins that features another fearsome guitpicker, James Burton.  Susie-Q 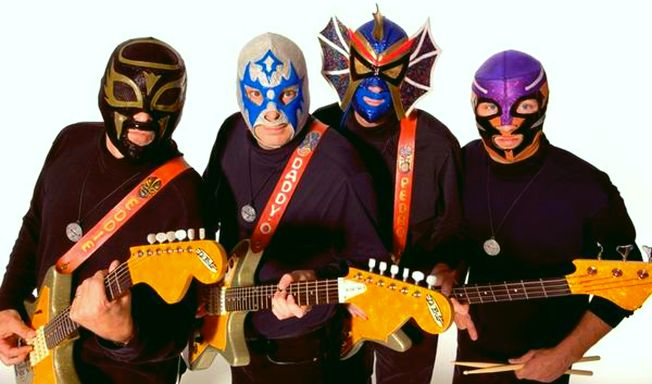 I’m a big fan of Mexican-wrestling surf rockers Los Straightjackets. Fact is, I have a weakness for just about any talent-filled band that doesn’t take itself too seriously. I also didn’t miss the fact that they landed on their surf-influenced sound in Nashville, not some paleface-less shore town in Southern California. Guitarists Danny Amis and Eddie Angel and drummer Jimmy Lester came together in ’88 as refugees from various rockabilly and post-punk bands (bassist Scott Esbeck signed on later). And according to their website, the band continues to tour and record with a new rhythm section. Here’s a sunny little rocker from their wonderfully named debut, The Utterly Fantastic and Totally Unbelievable Sound of Los Straightjackets. Carhop 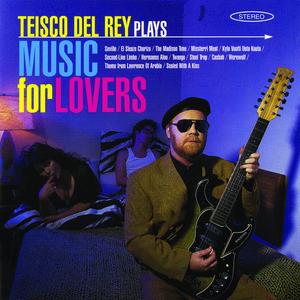 Teisco Del Rey. Sure, it’s a sweet vintage guitar. It’s also a pseudonym used by rock journalist Dan Forte (Editor-at Large, Vintage Guitar magazine), who recorded two hugely entertaining albums back in the Nineties. Even the titles made me smile – The Many Moods Of and Teisco Del Rey Plays Music for Lovers. But there’s nothing jokey (well, maybe a little) about the way he manhandles the burly surf-rock tunes that show up on both albums. In keeping with the multi-cultural spirit of this post, I give you… Casbah

If you thought Junior Brown was just another two-trick pony, think again. The country picker’s weapon of choice is the double-neck “guit-steel” – half standard electric, half lap steel… something you wouldn’t normally bring to a beach bonfire. But he can flat-out ride the surf too. Junior’s great ’96 release Semi Crazy ends with a seven-minute surf medley – Pipeline, Walk Don’t Run and Secret Agent Man. I couldn’t share the whole thing, but enjoy the ride all the way up to the last number’s signature riff. Surf Medley