So I stumbled into a trendy club where this cretinous DJ of the dubstep variety assaulted my senses and inner organs with pounding, relentless bass drops and seizure-inducing strobe lights. Several vacant women were doing a slow, faux-junkie dance on top of a concrete and metal structure that seemed to exist for the sole purpose of showcasing this strange zombie ritual. I was surrounded by the painfully hip, who gladly surrendered themselves to this unholy communion of science and bad taste.

The whole experience made me want to grab a bottle of bottom-shelf liquor and listen to some scratchy old record by Bukka White – or any of the artists featured in this week’s playlist. 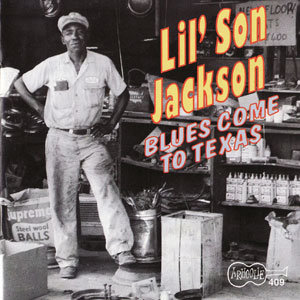 We’ll kick this off with the post-WWII country blues of Melvin “Lil’ Son” Jackson – a Texas-based performer who was rediscovered by producer and Arhoolie label owner Chris Strachwitz in 1960 (the cover photo at right was shot exactly where Strachwitz found him, at the Union Salvage auto parts store in Dallas). Jackson had a singular style with a hypnotic effect… That casual, intimate voice draws you in, and the insistent rhythm of his guitar (thumping bass, repetitive finger-picking) keeps you there. “I feel that Son Jackson was one of many artists who had a rather limited repertoire although he played the material he knew extraordinarily well,” Strachwitz wrote in the liner notes to the Arhoolie release Blues Come to Texas. “He had a beautiful guitar style and a haunting voice but a very limited number of songs.” I’m glad Strachwitz captured this gem for posterity. Gambler Blues

Former call girl Memphis Minnie wasn’t afraid to “do blue,” as an old-school comic might say. And apparently her second husband, Kansas Joe McCoy, didn’t have a problem with the lustier numbers they recorded together from 1929 to 1934. Why would he? “Bumble bee, bumble bee, please come back to me… He got the best old stinger any bumble bee that I ever seen.” I can think of a lot worse ways to be immortalized in song (wouldn’t want to be on the wrong end of a Taylor Swift lyric). But don’t write this one off as a “nod-wink” novelty tune. Minnie’s powerful voice betrays some hard-earned experience when it comes to the stinging ways of men (she was 33 at the time). I’m sure Muddy Waters had Minnie in mind when he recorded his classic Honey Bee some 21 years later. Bumble Bee 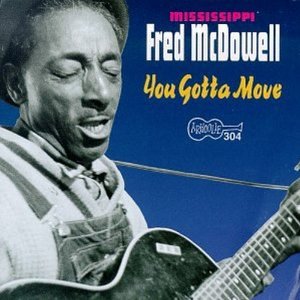 Is Mississippi Fred McDowell the Godfather of Dirty Blues? The kind championed by the Fat Possum label, home of the “not the same old blues crap” aesthetic? Probably a safe bet. If you listen to enough of that stomp-trance Hill Country blues – and artists ranging from R.L. Burnside to Husky Burnette – you’ve probably heard more than a few strains of Fred McDowell’s music. Which only seems appropriate, since the Tennessee native spent most of his life in Como, in the north hills of Mississippi. Here’s another recording that wouldn’t exist without the dogged efforts of Chris Strachwitz, who was honored with a Lifetime Achievement Award at last year’s Americana Music Awards in Nashville (Strachwitz tracked down McDowell in Como in the mid-Sixties). This tune inspired a certain two-piece band from the Rubber City. Black Minnie

If you prefer something a little more distinctive – maybe idiosyncratic is the right word – Skip James might be your guy. That high-pitched voice had a ghostly effect. And blues lyrics don’t get much more intense than this: “Hard time here and everywhere you go, times is harder than ever been before… And the people are driftin’ from door to door – can’t find no heaven, I don’t care where they go.” If I’d never heard this song before and someone threw those lines in front of me, I’d probably guess Dylan wrote them. James traveled from Jackson, Mississippi, to Grafton, Wisconsin, to record this song for the Paramount label in 1931. Hard Time Killin’ Floor Blues 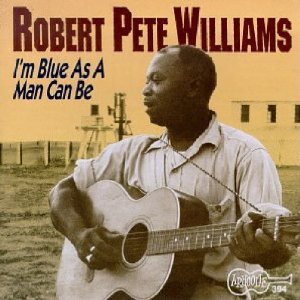 Robert Pete Williams is another true original with a very individual take on the form. With his hard-edged, visceral attack, he made his cheap acoustic sound like a dangerous weapon. In his book The Legacy of the Blues: Art and Lives of Twelve Great Bluesmen, Samuel Charters described Williams as “the definition of the country bluesman – a poet of his own experience, his language and idiom coming from the hard country background that shaped him.” That background included hard time at Louisiana’s Angola Prison, where he was sentenced in the Fifties for fatally shooting another man. Williams’ unique muse is evidenced by songs like Cows Love Music, Keep Your Bad Dog Off Me, and this tune, recorded by musicologist Harry Oster for his Folk-Lyric label in 1963 (Oster also played a key role in gaining a pardon and commuted sentence for Williams). Can’t Yo-Yo No More

The Son House story is pretty remarkable, even by blues standards. Born in Clarksdale, Mississippi, in 1902… inspired by the hollers of mule drivers… moved to Tallulah, Louisiana, where he picked cotton and preached… learned how to play bottleneck guitar with the actual neck of a bottle… shot a man dead at a party and was sentenced to 15 years at Parchman Farm (only served two)… played and drank (a lot) with the great Charlie Patton… recorded for Paramount in 1930… inspired a young Muddy Waters… drove a tractor on a Mississippi plantation… was “rediscovered” by Alan Lomax in 1941… moved to Rochester, New York, and worked in a boxcar assembly plant… was rediscovered again (in 1964 – by young, white blues enthusiasts)… learned how to play his songs all over again… made records and played shows aimed squarely at the burgeoning folk/blues revival… drank a lot more (which made his final run even more remarkable)… died in Detroit, 1988. Here’s where it all started, back in 1931: Preachin’ the Blues, Pt. 1 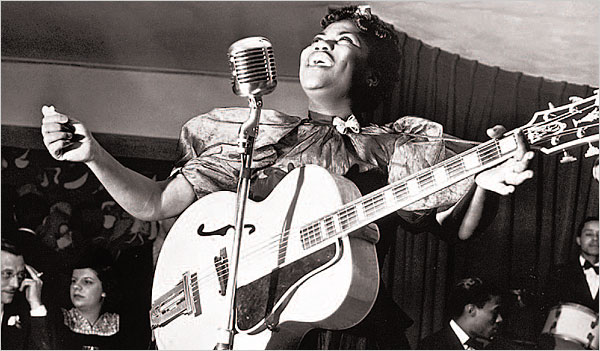 Technically, this next one probably doesn’t fall under the “country blues” category. Sister Rosetta Tharpe is often described as gospel music’s first crossover artist in that she often performed her R&B-flavored versions of gospel songs in front of hard-drinking sinners in dingy nightclubs. Now this might not seem like a big deal to those of you weaned on Madonna’s cross-burning/stigmata shtick. But blues artists such as Lil’ Son Jackson and Son House were troubled by the idea of mixing the sacred and the profane (although Skip James didn’t mind blurring the lines a little bit). Sister Rosetta blasted right through that barrier with this tune, which reached #2 on Billboard’s “race” charts in 1945 and also helped pave the way for rock ‘n roll. Still, the material is clearly gospel, and Tharpe’s tasty guitar licks are informed by country blues. Strange Things Happening Every Day

We’ll close this out by heading back to the Mississippi Hill Country, where Napoleon Strickland played traditional fife and drum blues for six decades. In a way we’ve come almost full circle – from Vicksburg to Chicago back to Como – as Napoleon and band cover a song written by Willie Dixon for the world’s greatest harp player, Little Walter. It’s also worth noting that the song is loosely based on This Train, a spiritual recorded by Sister Rosetta Tharpe in 1939 (watch a later performance below). The blues is a wonderful and mysterious thing. My Babe

Sister Rosetta Tharpe, performing This Train at the 1964 American Folk Blues Festival in England… also features the sweet giant of the blues, Otis Spann, on piano. Tasty guitar solo by the Good Sister, who also adds a new lyric just for the Brits: “This train don’t pull no wankers.” 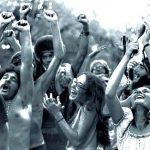 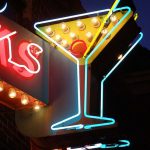