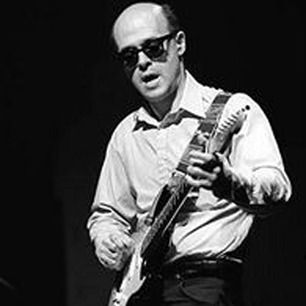 We’ve covered guitarist Robert Quine pretty well in this blog, especially here and here. But I had to throw this post together after my sister came across a long-lost article in the bottom of a box at her house in Akron, just a block from where Rob grew up. I think she got it from Rob’s mom, Rosalie, who did a fine job of chronicling her son’s career, starting with the trailblazing NYC punk band Richard Hell and the Voidoids back in the mid-70s, then with Lou Reed, then on to a whole slew of guest appearances – from Lydia Lunch and Marianne Faithfull to Tom Waits and Matthew Sweet.

The article, titled “Run – Don’t Walk,” was written by rock journalist and musician Rick Batey (author of “The American Blues Guitar: An Illustrated History”… you can buy a copy below) and appears to be from a UK music magazine, probably Melody Maker. I couldn’t find any evidence of it online, even over at the uber-research site rocksbackpages.com, which lists 32 articles about Rob. I’ve dated it from 1990, since Batey references “a 47-year-old ex-lawyer” and Rob was born on December 30, 1942. Rob seems especially wound up and expansive during the interview, which really nails his skewed wit and musical wisdom (in writing my posts, I was disadvantaged by not having tape running during my conversations with Rob). He talks at length about influences, his approach to playing, the state of rock at the time, and even his favorite gear. And he betrays a deep appreciation of rock’s roots, which might seem surprising given the shrieking, often atonal solos that defined his playing with the Voidoids. As Rob liked to point out, “by many people’s standards, my playing is very primitive but by punk standards, I’m a virtuoso.”

Before I share some excerpts (with music samples for those of you who want to play along), I’ll offer this in the way of “full disclosure”… Rob is my second cousin, which makes him second cousin once removed from Daniel Quine Auerbach of The Black Keys (which explains the “DQA” on Dan’s guitar strap). Needless to say, Rob was a big influence on Dan, who regrets not having the opportunity to play and record with him (Rob died in 2004 from a heroin overdose).