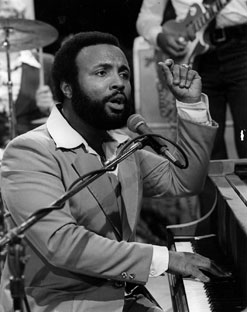 I’ve been at this for more than two years now and this is our first post on gospel music. Bless me, my readers, for I have sinned…

I certainly feel sanctified now that I’ve seen “Classic Moments in Jubilee Showcase,” which features four broadcasts of the Emmy-winning gospel program that ran from 1963 to 1984 on WLS in Chicago. The Soul Stirrers, The Staple Singers, Andrae Crouch, Jessy Dixon, Inez Andrews… You can’t lose with this A-list of gospel talent. But the show’s secret weapon might have been its host, Sid Ordower – a buttoned-up guy who could’ve easily hosted a nationally syndicated game show, but made it his mission to present gospel music in a dignified, professional setting. And I’m not sure anyone’s done it better since.

I especially liked the ecumenical feel of Ordower’s commentary throughout the programs. As a Jewish man who was very active in the Civil Rights movement, Ordower brought a rich perspective to the music – one that made it clear the artists and their songs weren’t just glorifying a higher power, but also showing us a better way of living down here on earth. Here’s part of Ordower’s introduction of the Norfleet Brothers, from a 1964 broadcast:

“Many people wonder just where the spirituals and jubilee songs come from. But you know it’s really no mystery. They developed out of the experiences of people expressing their sorrows, their joys, their hopes and their deep yearnings for a better life. Some of these songs go back as much as 100 years. And they are as fresh and as full of meaning today as they were when they were originally sung.”

For a better sense of Ordower’s legacy, check out this 11-minute history of Jubilee Showcase, which includes parts of interviews with Mavis Staples and gospel/soul singer Otis Clay:

The performances by The Staple Singers alone – with Pops playing deep blues on guitar and Mavis wailing away – are worth the price of the DVD. But some of the lesser-known acts are equally fascinating, like the very funky Salem Travelers, named after the Greater Salem Baptist Church in Chicago. The group updates the gospel quartet tradition with a heavy dose of ’60s soul and even played New York City’s Apollo Theater – as it turned out, on the day Martin Luther King Jr. died. They eventually recorded a tribute to Dr. King, Tell It Like It Is, that they also performed on Jubilee Showcase on June 28, 1969. The group remembers it well, as singer Robert Dixon points out in one of the DVD’s interviews: “Sunday morning, a lot of them before they got to church they’d get ready to look at Jubilee Showcase. And they’d go to church saying ‘well, you know, those Norfleet Brothers really sung today! Those Salem Travelers were on there. Those Mighty Clouds…’ I was proud of it. I was very proud of it. It was just one of the best things that could’ve happened to the groups. As a matter of fact, I know it was.”

We’ll close with a little taste of Tell It Like It Is, recorded for the Chess subsidiary Checkers and arranged by Sonny Thompson, who played piano on some of Freddie King’s classic sides for the Cincinnati-based King label:

To order Classic Moments in Jubilee Showcase, check out this brief promo or go here.

But wait… There’s more! For some good old-fashioned showmanship, it’s hard to top The Mighty Clouds of Joy (from “TV Gospel Time,” a program that aired in Baltimore). Nice footage of gospel star (and show host) Jessie Mae Renfro too:

Here’s another hair-raising video of great American gospel. This one features The Campbell Brothers (with Chuck on pedal steel), a sacred steel gospel group caught rockin’ the House of God Church in Rush, NY. We tagged it on the end of a previous post… Definitely worth a second look: 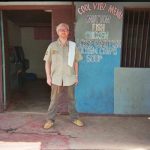 From Cali to Kingston: The Unlikely Journey of Rusty ZinnGeneral