I thought this theme worked pretty well in our blues post. But I couldn’t resist expanding the definition so I could cover some of my favorite jazz summits. Think of these collaborations as “short-lived” – maybe more than a session or two, but nothing as durable as a long-standing partnership like gypsy guitarist Django Reinhardt and his go-to guy, violinist Stephane Grappelli. 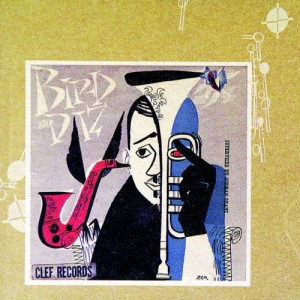 Charlie Parker, Dizzy Gillespie and Thelonious Monk: It’s easy to imagine Bird and Dizzy as a couple of hipster deities, trading riffs for all of eternity at the Mt. Olympus Cafe. But even though they practically invented bebop during their informal jam sessions back in the early Forties, they spent a relatively small amount of time in the studio together compared to the many sessions they shared with other jazz artists, such as Miles Davis (Bird) and James Moody (Diz). Nothing against Miles, but I don’t think Bird ever came across a more formidable sparring partner than Dizzy. In fact, you could argue that the latter’s best solos on their shared recordings brought a little more heat than Bird did, even without all those needle-ing distractions. This 1950 session includes Monk on piano (the jazz giant’s only recording with Bird), making it a summit for the ages. Bloomdido 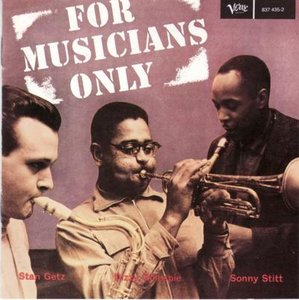 Dizzy, Stan Getz and Sonny Stitt: I could feature Dizzy with a number of worthy accomplices, mainly as a cheap excuse to listen to his jaw-dropping solos. But this one’s special for several reasons. First, it features Diz at the very top of his game… he blew the roof off the studio at this ’56 session. Second, it’s a tribute to the man’s sense of confidence that he brought along two heavyweights on sax with very different approaches to their instruments – Stitt with his hard-charging style that owed a big debt to Bird and bebop; and Getz, the cool, breathy player they simply called The Sound. Third, I love how all three men tackled exotic little workouts like this one that take advantage of their great flair for drama and dynamics. Dark Eyes 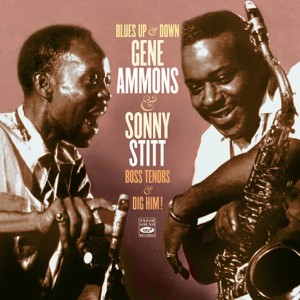 Stitt and Gene Ammons: Stitt is another guy you want to hear in virtually any setting – including soul jazz, which often found him paired with a B3 giant like Brother Jack McDuff. Ammons brought a little more heft to his sound and also distinguished himself in the organ-combo format. But here the two men duke it out with little else to distract us from the main event. Actually, it’s more like a conversation among two old friends with seemingly endless ways of expressing themselves. I’ve listened to a lot of extended solos over the years, including more than a few that rubbed me the wrong way (like the one I played last week?). When these guys take off, you just sit back and enjoy the ride. Blues Up & Down 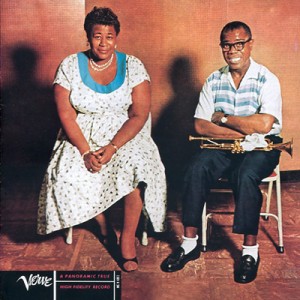 Ella Fitzgerald and Louis Armstrong: Sweet and bitter. Satin and sandpaper. Sheer elegance with a side of ham. Why would anyone think this wasn’t a winning combination? Verve producer Norman Granz brought Ella and Louis together for several collaborations in the Fifties, and they hold up as some of the best jazz recordings of the era. Granz upped the ante by backing these two legends with an all-star cast, including Oscar Peterson on piano and Buddy Rich on drums. And they rip into the Great American Songbook like it was, eh, a fine porterhouse steak… with a whiskey chaser. Here they celebrate their obvious differences with a George and Ira Gershwin tune that was begging for an Ella-Louis makeover. Let’s Call the Whole Thing Off 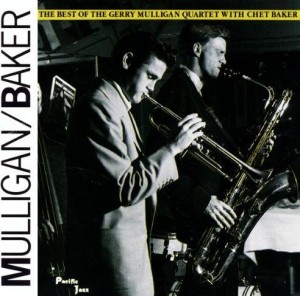 Chet Baker and Gerry Mulligan: Call it “chamber jazz” if you want. I call it one cool summit – the Golden Boy of West Coast trumpet meets the classically trained Mulligan, a master of baritone sax. The two stars aligned in the early Fifties during Monday-night jam sessions at The Haig, a small club on Wilshire Boulevard in L.A. Mulligan had made a name for himself with his landmark Birth of the Cool recordings with Miles Davis. Baker gained some cred when he was hand-picked by Bird to play a number of West Coast dates in ‘51. Together, they laid down some classic recordings as part of the pianoless Gerry Mulligan Quartet, with Bob Whitlock on bass and Chico Hamilton on drums. The chamber feel signaled a stark departure from the Bird-Diz model: Instead of playing mind-boggling melodies in unison, Baker and Mulligan adopted a far more relaxed approach, weaving around each other with separate yet simpatico lines. Unfortunately, this partnership only lasted a year – until Mulligan was imprisoned in ’53 following a drug-related arrest. Soft Shoe 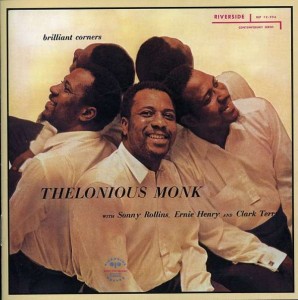 Thelonious Monk and Sonny Rollins: Several years ago, there was a lot of hoo-ha around two releases featuring Monk and John Coltrane – a previously unissued Carnegie Hall performance from ’57, and a reissue of all their studio sessions for the Riverside label. Essential stuff… but I still think Monk’s perfect foil on sax was Sonny Rollins. Certainly no one could improvise like Trane, who pushed Monk’s thorny originals in bold new directions. But Rollins and Monk drank from the same deep well. They shared that rare ability to sound both ancient and completely modern – often in the same solo. Rollins and Monk collaborated on several sessions in the Fifties. Their crowning achievement was 1957’s Brilliant Corners, which includes some of Monk’s most challenging compositions. In fact, the title song might be the wildest ride in Monk’s entire catalog: Brilliant Corners 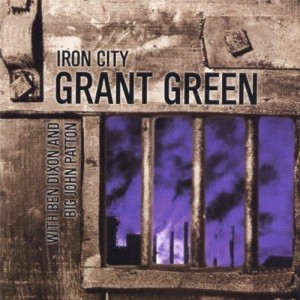 Grant Green and Big John Patton: As Blue Note’s most-recorded artist, Green played with countless lineups featuring virtually everyone who recorded for the venerable jazz label. He also covered a lot of ground stylistically, moving from straight-ahead jazz to funk to organ-combo soul. I love it all… can’t get enough of Green’s warm, horn-like tone – whether he was caressing a ballad or cranking up the heat on a dancefloor favorite. But I’ve got a special weakness for the tunes he recorded with the hugely underrated organist Big John Patton. Green and Patton teamed up on a number of records attributed to both artists and a few others, including saxmen Lou Donaldson and Don Wilkerson. Here they work their magic on a 1967 session that was recorded during a relatively fallow period in Green’s career, when he was battling with a chronic drug problem. Iron City